Crimson Skies is a board game published by FASA Corporation in the late '90s. In an alternate history 1930's setting, the US has broken apart and a dozen nation-states vie for control of the air. I contributed to several Crimson Skies sourcebooks as a freelance author for FASA Corporation.

Crimson Skies caught my eye due to my love of old WWI dogfighting games like Dawn Patrol and Ace of Aces. Slick combat rules set against the backdrop of an interesting world also reminded me of one of my all-time favorite board games, Battletech.

Crimson Skies is now a registered trademark of Microsoft. 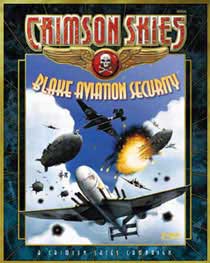 This was the first time that FASA approached me to author a sourcebook entirely on my own. Since Paladin Blake was such a prominent character in the CS universe, I considered it my "big break". I dreamed of seeing my name on the cover like Steve Kenson and other "big-time" FASA freelancers. Alas, right about that time FASA stopped putting author names on the covers and instead I got "A Crimson Skies Sourcebook". ☹ 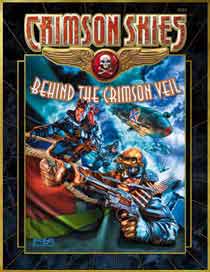 Behind the Crimson Veil
1999

Pirates! Exclusive! An intimate look inside the lairs of 4 successful pirate gangs - including the Black Swans! Exclusive! First look at the fiery GM-1 Tempest and 5 other famous aircraft! Performance vs. Cost - Manufacturers share their construction secrets! Nuts & Bolts - Soup-up your warbird with spectacular new components! Boarders Away! Capturing a zep, up close and personal!

The thing that sticks out most in my memory was how they used real photography of models in period garb to bring the world to life. I was given a few reference photos for my pirate gang, the Enforcers - such a motley crew. 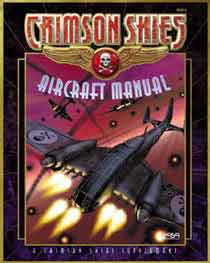 Exclusive! First peek at the 26 deadliest new warbirds to prowl the Skies! Danger! Will the New 360 degree turret bring an end to heroic dogfighting? Dirty Deals! Details on the controversial GM Intrepid! The Crimson Skies Aircraft Manual provides descriptions, game statistics and rules for the newest selection of planes in Crimson Skies. It also provides a first look at the air forces of the Atlantic Coalition, Columbia, Maritime Provinces, Pacifica and Utah.

For this plane sourcebook, I was asked to do profiles on the three planes featured in the Great Helium War serial - the Kingcobra, the Zion, and the Behemoth. The fiction was definitely the best part of the Crimson Skies universe. 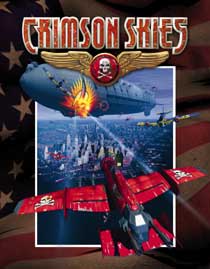 FASA went belly-up before the sourcebook was published, but I did some scenarios and characters about nation of Hollywood.

For a taste of what would have been found in the sourcebook, check out Really Bad Day at Black Rock.

Funny story: I had to make up so many different pilots for the scenarios in this book that I wrote an "automatic pilot generator" computer program to spit out semi-random, balanced pilot statistics.